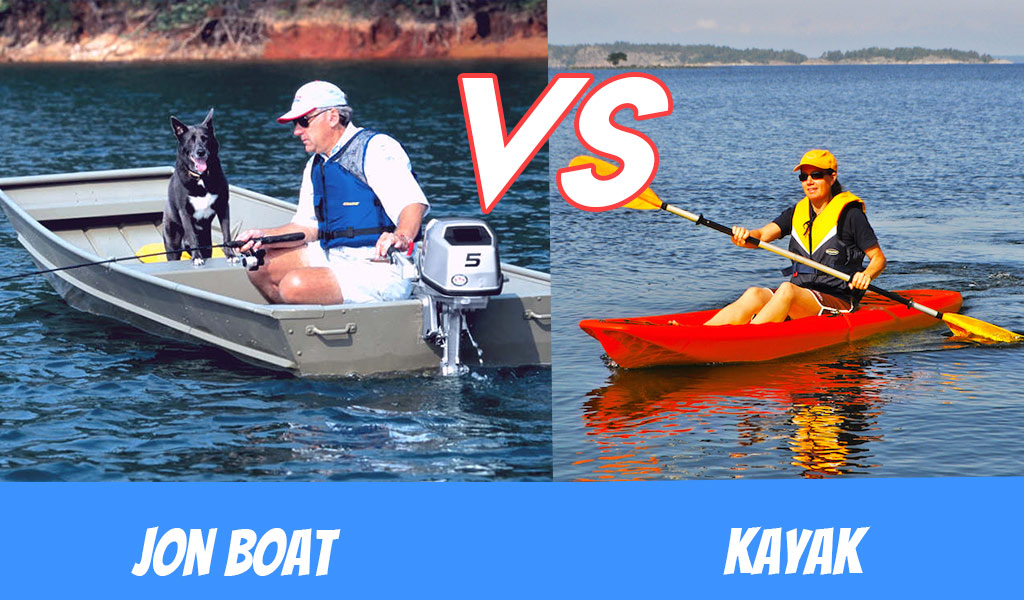 Watercrafts had evolved a lot. And with this evolution, the uses had got a wide versatility.

Apart from transport and hunting, they’ve got themselves used in sports, recreation and so on.

On that note, one of the sportiest forms of watercraft is- Jon Boats and Kayaks.

Each of these two had got a large number of users. And this article is going to highlight the similarities between these two watercraft.

Let’s start with some basics-

What Is A Jon Boat?

Jon boat is a flat-bottomed boat with a few seats built on it.

Materials like aluminum, wood, fiberglass etc. are also used to build this kind of boats.

And the most common uses of such boats are in fishing and hunting.

Kayak in the other hand is a small and narrow watercraft with a V-shaped hull and double-bladed paddle.

It has a deck covered with a cockpit.

Some kayaks are of a single seat, where some of them are double-seated.

The Difference Between A Jon Boat And A Kayak

The first thing that comes in the discussion is the structure of the hull.

It’s the most visible parts that differentiate each other as well.

In the case of Jon Boats, the hull is almost flat.

It tends to ride over the waves.

And in the case of kayaks, the hull is V-shaped.

And are designed to cut through the water waves.

The Deck And Cockpit

One of the finest things, when you’re traveling on water, is to have a cockpit or deck.

Water can’t build up inside the boat for that, and you can move as reckless as you want.

The kind of decks and cockpits we’re talking about, only come with kayaks.

And there are wide variations in them. But if you’re a Jon Boat user, you might miss that out.

A major difference between Jon boats and Kayaks is the speed.

As the hull of Jon boats is designed to be flat, it’s supposed to ride on calmer water.

On the other hand, the kayaks have a hull that can cut through the water waves and move fast as well.

So, you can ride on kayaks even on tidy water.

Both kayaks and Jon boats have a number of options to upgrade and equip with accessories.

And the most common upgrade people are likely to equip is the engine.

So, we don’t see a scope of declaring any winner here.

In terms of safety and stability, Kayaks had been proven to be more preferable choice.

As the design of Jon Boats is made to be flat, they are quite unable on tidy water.

So, we recommend using kayaks in case you’ve to get involved in events like bass fishing.

Comparing the prices of each other, Jon Boats seem to be the winner here.

As they’re less complicated in design and average in structure.

On the other hand, kayaks will cost you a good amount of money.

And if you ask for our neutral opinion, it deserves to.